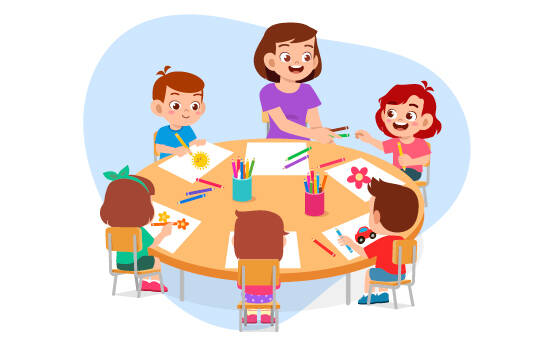 In light of the overall objectives of the project, the working methods were selected with due consideration to the joint elaboration of meanings. The methodology aimed to foster the children’s intellectual development, supporting spontaneous exploration and encouraging the children to form their own opinions with regard to behaviour and points of view, free from pre-determined normative frameworks or manipulation.

The aspiration was to stimulate the children’s own exploration and research through playful and non-judgmental approaches. The children were encouraged to listen to each other and to reflect together. Each child was given the time that he or she needed in order to develop their own ideas and they learned to accept that there are different positions and statements. Through this exercise, the children started to open up and felt at ease about sharing stories from their personal and family lives and school situations. To facilitate this process, the workshops were organised in an enabling environment that differed from the typical classroom setting. The girls and boys were welcomed in a warm and informal atmosphere that aimed to stimulate curiosity, dialogue and interaction in a setting characterised by trust and wellbeing. In addition, the choice of lights, objects and materials in the meeting room helped to distinguish the setting from the classroom and to inspire a different attitude where children can explore their evolving capacities.

The first phase of the project was implemented from September 2018 to July 2019. It had the objective to gather perspectives and perceptions about gender stereotypes of girls, boys and teachers, by engaging them in the narration of traditional fairy tales. The aspects that emerged from this exercise would then inform the development of an educational path for children, the practical guide for teachers and the training cycles to be proposed in the subsequent phases of the project implementation.

In order to decide, which fairy tales to work with, a first survey was conducted among the children. They received a chart representing the images of 16 traditional fairy tales and were asked to vote by applying stickers on the fairy tales they preferred.

Subsequently, after proposing the overall path of the activities to the children, ascertaining their interest to participate in the activities and agreeing on a sort of “pact”, the consultations began in the form of workshops.

The 44 children involved were divided into four sub-groups that worked each on four fairy tales (The Cat in Boots, Sleeping Beauty in the Woods, Rapunzel and Bluebeard) over three sessions of about 2 hours each.

The path was documented through photo-video support, which was then edited in a short documentary and presented to families towards the end of the school year (June 2019), taking the opportunity to discuss the results of the sessions.

In parallel, three focus groups were conducted with teachers and educators. During each session, three selected fairy tales were discussed from different angles, with the aim of exploring the field generated by the story, the possible reference to the determinants proposed, the perception of stereotypes in relation to each participant’s biographical and professional experience. These moments were also an opportunity to share in a circular way the work undertaken and the findings that emerged from the workshops with the children.

The second part of the project involved the same boys and girls of the previous year, now in the second grade, who enthusiastically expressed their interest in participating in the new cycle of activities through a renewal of the “pact”.

The activities carried out in this project phase had a stronger educational intention and had the objective of informing and guiding the development of educational activities aimed at accompanying boys and girls in the development of friendly and respectful relationships with their peers, raising their awareness and taking on a critical attitude towards gender stereotypes.

In order to convey the complexity of the project’s contents to people of this age, it was decided to engage them on a narrative and playful level: a metaphor in the form of a story was therefore developed to represent the key elements that were to be explored together, in particular the EIGE indicators, access to equal rights and equal opportunities, the value and uniqueness of each individual person, the equality in difference, which is always considered as a value. The story entitled “Monkey Island” was proposed to the children as a useful lens to analyse later on the various traditional fairy tales with which they would work, and also to encourage discussion and shared reflection between the children and adults on the issues addressed.

Each sub-group of about 10-15 children worked on three fairy tales during four sessions of two hours each. The first meeting was dedicated to exploring together the metaphor of Monkey Island in order to understand the orientation that it implies. The story was read out and analysed together with the help of different images (in particular Japanese watercolours), objects (monkey puppets) and drawings (during the reading of the story, a co-facilitator developed a drawing on a cardboard so that the image of a large island gradually took shape). The exchange was guided by a few questions, formulated ad hoc, to bring out the EIGE indicators, which were then graphically simplified on seven little flags. The story of Monkey Island was experimented and experienced through games involving physical activities and it was memorized through a drawing activity. The drawings produced by the children were collected, cut out and then used to compile the “Librone della Memoria”, the big book of memories, of the journey undertaken together, to be handed over to the class at the end of the activities.

During the following three meetings, the three fairy tales were read and discussed together: Little Red Riding Hood, Hansel and Gretel and Snow White.

At the beginning of each session, the children’s attention was directed back to the story of Monkey Island, which became the starting point for the subsequent discussion and interpretation of a traditional fairy tale. The children were encouraged to participate actively in the dialogue through the joint creation of the EIGE indicator flags (and choosing the terms to describe them) and the guiding questions, focusing the discussion on the elements identified in the fairy tales – such as social roles, work, decision-making, health, violence and protection. The method used aimed to welcome the children’s point of view in discussions without making judgements. After the discussion, moments of symbolic play were proposed that were oriented at the events of the fairy tales in order to experience in a very concrete way respect, delicacy, solidarity, care and body contact regardless of gender, age, social position of the characters or the children. Despite the fact that in these activities there was also resistance on the part of the boys to represent female roles, after some encouragement and role corrections (e.g. the grandmother became a grandfather), the difficulties were eased. In the final meeting, each and everyone took turns to perform Snow White being fast asleep and cared for by the dwarfs. The sessions always ended with a proposal involving drawing and graphs and using specific techniques that are barely used at school and therefore allowed the children to experiment new ways of expression.

In the closing session, the children handed over the “Librone della Memoria”, the big book of memories, which included the drawings and compositions that were a trace of the journey they had undertaken together, as well as the story of Monkey Island, a child-friendly version of the UN Convention on the Rights of the Child, the little flags with the EIGE indicators that had guided the discussion of the fairy tales, as well as a paper garland (one of those that used to be hand made with scissors in the past) of many little figures, men and women, of different colours and shapes to symbolize humanity, all the same and yet all different.

The activities carried out, as described above, have generated an important opportunity to translate the challenging pedagogical…

The working group that carried out the project activities in Italy, which was tasked to address such complex and sensitive…

The Italian Constitution provides for the equality of all citizens as one of its fundamental values. The right to equality…

The first exploratory phase with children, teachers, and parents during spring 2019 allowed us to focus and refine the questions…